The importance of breathing mechanics 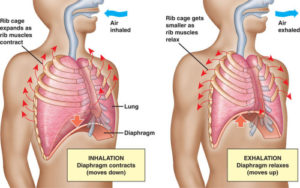 Patients complaining of neck and shoulder discomfort are regularly found, via case history and osteopathic examination, to breathe primarily into the upper ribs and chest (mouth / upper rib breathing) instead of into the lower ribcage and abdomen (abdominal breathing).  The reasons for their impaired breathing mechanics may vary (e.g. migraines, gastro-intestinal dysfunctions, anxiety, depression, sleep apnoea).

How does breathing play a role in our health?

Breathing has a huge effect on our health in a number of ways. Poor breathing mechanics and a rapid breathing rate may lead to neck and shoulder stiffness.  They can also contribute to poor systemic health and poor tissue oxygenation.

Normal breathing at rest primarily involves the diaphragm, a large, dome-shaped muscle found at the bottom of the chest cavity, attaching to the lower six ribs and forming the floor of the thorax and roof of the abdominal cavity. The diaphragm contracts, pulling downwards like a plunger, drawing air into the lungs and expanding the lower rib cage.

When more air is required (e.g. during exercise), the muscles of the neck and shoulders and at the front of the chest are recruited to draw the upper ribs upwards, further filling the lungs to support the diaphragm and providing more oxygen to meet the demand from the body and to get rid of excess carbon dioxide building up from the exercise.

During a period of stress, the fight or flight response is triggered in the same way as whilst exercising. The upper ribs start working and the breathing rate increases. The neck and shoulder muscles, working hard to keep the upper ribs moving, may become tight and tired and the neck joints starts to become stiff.

If this stress continues for a long time, the body forgets that this is an abnormal way to breathe. When the stress passes, the person continues to use these upper ribs for breathing at rest and a more rapid rate of breathing may also be retained.  This can produce long term tension and stiffness in the neck and shoulder muscles as these muscles regularly become fatigued.

The diaphragm contraction that draws air into the lungs like a plunger also has an important role as a pump for the circulatory system.  It draws blood back into the chest from the legs and abdominal cavity below as the pressure in the chest cavity changes.  This same mechanism also provides circulation to the lymphatic system, ensuring that immune cells are being pumped to all parts of the body.

The effects of hyperventilation

A more rapid respiratory rate (hyperventilation) is seen in mouth / upper rib breathers, resulting in shortness of breath and dizziness at rest. These patients may have a history of panic attacks.

When the respiratory rate is too fast, the body exhales too much carbon dioxide. This changes the pH of the blood, so that the oxygen in it binds too strongly to the red blood cells.  As a result less oxygen passes from the blood into the muscles and organs.

The brain is confused into thinking that there is not enough oxygen, when in fact there is plenty.  It is simply not being released from the blood.  It triggers the breathing rate to escalate again, making the situation worse. The person feels out of breath and possibly dizzy.  If the breathing rate doesn’t normalise then the fight or flight response is triggered and a feeling of panic overcomes the person (a panic attack in more extreme circumstances).

Which category do I fall into?

Gradually these exercises will become easier and feel more natural.

Discuss your breathing mechanics with us at your next Woburn Osteopaths appointment: 01525 290615 / [email protected] 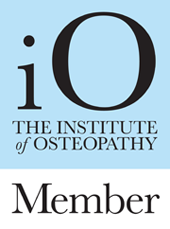